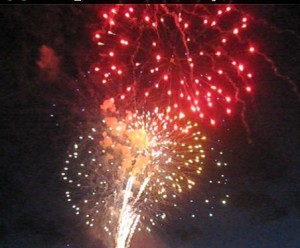 On July 1st Anthony Princiotti conducted the Vermont Symphony Orchestra in the open air at Sugarbush offering “Symphony Royale” with music fit for a king…or a summer evening in Vermont! Handel’s fireworks began the program and Northstar’s fireworks concluded it, in this musical homage to royalty. The noble procession included Scheherazade’s Kalendar Prince, the King and Queen of Troy, and the King of Siam. The concert was in honor of Independence Day celebrating America’s freedom from monarchical rule with their own version of royalty, Duke Ellington! The performance was crowned by the majestic 1812 Overture and selections from Sousa, the March King, which were both accompanied by an amazing fireworks display with the finale captured in this short videoby Susan.

Intriguingly the concert, being on July 1st, was on Canada Day when Canadians celebrated their royalty with the visit of its newest couple, William and Catherine, who were at Parliament Hill in Ottawa to join Canadians country wide to celebrate the 144th anniversary of Confederation.