A Vermont covered bridge is always a great attraction. It is part of the beautiful Vermont scenery. Whether long, short, painted, unpainted one span or two, windows or solid walls there is something romantic about these structures.

This is the Lincoln Gap covered bridge, built in 1879, in the town of Warren, VT and just 5 minutes from West Hill House B&B.

The general condition of Vermont’s public highway system began to improve throughout the nineteenth century. By mid-century, individual towns purchased most of the early private turnpikes, primarily in response to rising protests against their tolls.

Improved road conditions were especially important in the late 1920s, as the automobile had already firmly established itself as the newest and most improved method of travel in the State. The covered bridges and winding highways that had once carried horses and carriages began carrying cars and trucks as Vermont, like the rest of the country, embraced the automobile and the ease of travel is provided. Furthermore, the development of the automobile and modern roadways facilitated the growth of tourism in Vermont, which has become a major factor in the state’s economy. 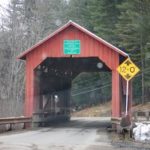 Many guests who stay at West Hill House B&B enjoy seeking out these iconic bridges. To help them with their search we have mapped out a Covered Bridge Tour which includes numerous examples of covered bridge construction. A 10 or 12 feet headroom is common and bridges are usually restricted to one car at a time. A car is much heavier than a horse and buggy! To avoid damaging these beautiful structures, be aware of any height, width,  weight or speed restrictions.

If you are interested in touring farther afield in Vermont, we suggest you get hold of a copy of Spanning Time, Vermont’s Covered Bridges by Joseph C. Nelson. Well written and beautifully illustrated, this book divides the state into 15 touring routes and includes many interesting facts about each bridge on the route. The book also contains a covered bridge glossary, illustrations and descriptions of the various truss constructions, as well as a section with brief biographical information on early bridge builders.

Why covered? The answer is simple. Covered bridges were roofed and enclosed to protect the wooden roadway’s structural elements from the weather, which in Vermont can be quite harsh. The roof and sides provide not only protection from the snowy and stormy weather, it also provides additional structural support for the roadway.

Of course, a Vermont covered bridge also makes an excellent place to go with your sweetheart and sneak a kiss!