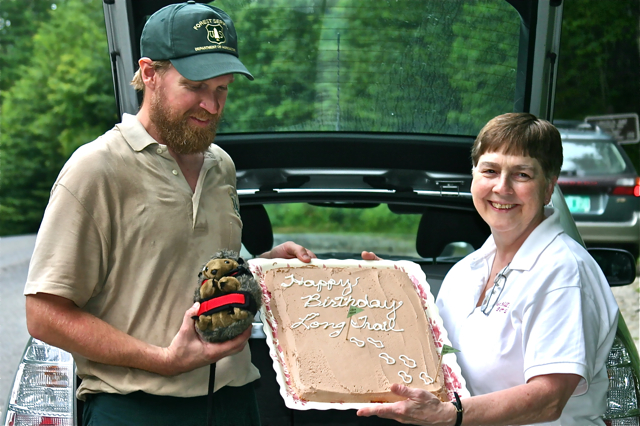 Built by the Green Mountain Club between 1910 and 1930, The Long Trail is the oldest long-distance trail in the United States. The Long Trail follows the main ridge of the Green Mountains from the Massachusetts-Vermont line to the Canadian border as it crosses Vermont’s highest peaks. It was the inspiration for the Appalachian Trail, which coincides with it for one hundred miles in the southern third of the state.

To Celebrate the 100th anniversary of the start of the building of the trail, a month long Relay Hike up the entire Long Trail started on Saturday, July 17, 2010 with day hikes led by GMC Sections, board members, and local volunteers.

To ensure this is an end-to-end event, Prickles the Porcupine, the Trail Mascot, will be carried along each section and then handed off to be carried section by section all the way along the trail.

To mark the arrival of the Relay at the Lincoln Gap on August 2nd, West Hill House baked a cake. The arriving hikers enjoyed it along with water and soft drinks. Prickles of course had a photo op!