Glenn at the door of his West Hill Sugar Orchard

Maple syrup and Vermont go together like, well, maple syrup and pancakes! Forty years are required to grow a sugar maple tree large enough to tap. A tree ten inches (25 cm) in diameter is considered minimum trappable size for one tap. A grove of sugar maples is called a sugar bush or sometimes a maple orchard. It takes 4-5 taps to produce enough maple sap (40 gallons – 150 liters) to produce one gallon of syrup. Would you like to see it in action?

The Vermont Maple Open House Weekend will be held the weekend of March 25th and 26th in 2017, and you can experience it right here around West Hill House B&B.

The West Hill Sugar Orchard is a short walk from the B&B and is a small scale, locally operated and community supported maple syrup producer. The orchard gathers its sap by bucket and boils it over a wood fire using traditional maple sugaring techniques. Owner Glenn and his associated will be ready to welcome you for a visit over the weekend!

For breakfast we shall of course be serving maple syrup to accompany Susan’s delicious dishes, and maybe even as part of breakfast dessert. Newly produced 2017 will be available to purchase packaged in Glenn’s signature glass bottles decorated by his own wood prints. To help you enjoy this special weened we have created a special package just for you! 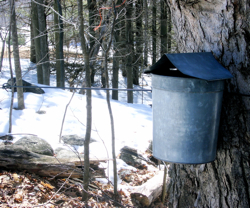 You might be inserted to know that Vermont has strict Maple Laws governing the production of maple syrup to ensure that you get the highest quality maple syrup. For such a deliciously complex flavor, maple syrup is surprisingly simple to make. Seeping spring-time sap from a maple tree is collected and boiled down to a golden syrup. Nothing is added in the entire process and only water is removed, leaving one of nature’s remarkably culinary gifts.

For years, Vermont maple syrup has been divided into one of four grades based on color and flavor.  As consumer preference has changed over the past century, so too has the grading system evolved to provide a more accurate description based on consumer preference.  The names of each grade, however, did not necessarily provide a meaningful description of the syrup.  With the old system of grading, Grade B was often mistaken for being a lower quality than Grade A, when in fact the quality was just the same it just had a stronger taste.

Beginning in 2014, Vermont maple syrup producers started using a newly developed “Vermont” grading system that provides a better description of each grade, or class, of syrup.  Each grade will state a color and a flavor descriptor: 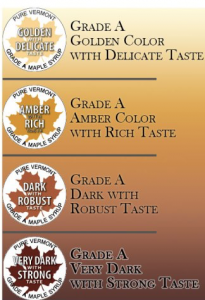 Maple syrup gets “A” grade.

Some interesting facts about this most luscious sweetener:

*it contains an abundant amount of naturally ocurring minerals such as   calcium, manganese, potassium and magnesium

* it is a natural source of beneficial antioxidants

* it is more nutritious than all other common sweeteners

* it contains one of the lowest calorie levels

* it has been shown to have healthy glycemic qualities

All 4 grades of maple syrup are of equal quality, density and sugar content so it’s just a matter of personal preference – what’s yours?

The Native Peoples of the Northeast were the first to discover that the sap of the maple tree could be boiled down to provide an addition to their diet. Vermont produces about 3.5 million gallons (about 13 million liters) of maple syrup annually, providing 40% of the US supply. Several other states produce maple syrup on a smaller scale. In comparison, Canada produces about 10 million gallons ( about 38 million liters) per year supplying the domestic market and providing about 75% of the world supply.

All that luscious maple syrup would look after a Paul Bunyan sized stack of pancakes with some maple syrup left over for your pancakes!

For more information check out vermontmaple.org, and to experience Maple Sugaring first hand come and stay at the B&B the weekend of March 25th and 26th … we have a special package just for you!