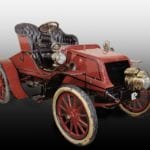 A great adventure began by accepting a friendly wager!  That’s exactly what happened to Dr. Horatio Nelson Jackson, a physician and car enthusiast from Burlington, Vermont!

In 1903 Dr. H. Nelson Jackson of Burlington, Vermont was visiting in San Francisco, California when he overheard someone say he bet no one could drive one of ‘those newfangled automobiles’ across the country. Jackson bet $50 that he could. He believed that before long cars would be driven from coast to coast. He even though he could do it even though he didn’t own a car and furthermore, he did he even know how to drive!

Dr. Jackson found Sewall Crocker, a young bicycle mechanic, who agreed to join him on this epic journey.  On May 23, 1903 the two set out from San Francisco to cross the country in a slightly used Winton touring car they named ‘Vermont’. Somewhere in Utah a third team member,  Bud, an American Bulldog, joined the adventure.

Carrying: coats, rubber protective suits, sleeping bags, blankets, canteens, a water bag, an axe, a shovel, a telescope, tools, spare parts, a block and tackle, cans for extra gasoline and oil, a Kodak camera, a rifle, a shotgun, pistols, compass in hand and bulldog Bud as a mascot, the great adventure began. 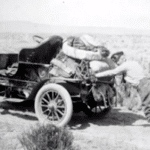 Many challenges were met along the way.

Facing untold tire and mechanical repairs, tracks that passed as road, streams that must be forded, mud holes and rocky terrain to be contended with and with a 5 gallon can of gas which they filled where ever they could, they continued undaunted. Very few filling stations, no garages, no maps, no motels, and for sure no GPS! Reporters across America picked up the story, telegraphing the the latest adventures of the two to national newspapers.

‘Vermont’ and its passengers finally arrived in New York City on July 26, 1903, 63 days, 12 hours, and 30 minutes after leaving San Francisco and, as a result, completing the first transcontinental automobile trip in the United States. Shortly thereafter, arriving back home to Burlington, VT.

By rough calculations and taking as close to the same route as possible, today the trip would probably cover approximately 3700 miles and would take almost 60 hours to complete. You can even do the trip in one of those “newfangled”  Tesla EVs (electric vehicles), the route is more direct as it is dependent on where chargers are and trip would cover roughly 2,950 miles and also take almost 60 hours including the recharging time. Of course one could stop here at West Hill House B&B in Warren, Vermont to charge the EV!

$50 won but apparently never collected.  Dr. Jackson drove to his home in Burlington where both he, Bud and ‘Vermont’ were celebrities. 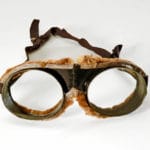 Bud’s Goggles on view at the Smithsonian Museum.

Upon returning home Jackson became a successful businessman, bank president, newspaper publisher, and owner of the first radio station in town. Despite his age he joined the army in WWI, earning the Distinguished Service Cross, and was one of the founders of the American Legion. He died at 82.

The new gasoline “buggies” caught the fancy of people and by 1905 there were 270 automobiles in Vermont and 15,000 miles of bumpy Vermont roads for these new drivers to explore. Again, people and horses were terrified but the automobile was here to stay.

The story details differ somewhat depending on the source one reads however the bottom line is, this was quite an adventure. To complete the adventure and thus win the $50 wager it had cost Dr. Jackson approximately $8,000.

The story of the trip is told in the Ken Burns film “Horatio’s Drive.” There are many other resources, including Vermont: TheState with the Storybook Past by Dora Cheney, History.com, Smithsonian Museum, Wikipedia, My ChamplainValley.com,  which will fill-in more details of the life and adventures of a  most interesting Vermonter, Dr. H. Nelson Jackson of Burlington.